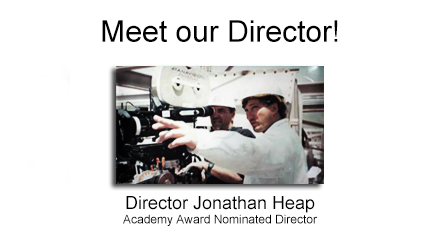 “Shoot with working filmmakers who are actively in production”

“The first thing you should do is get a reel at Academy Reels. Their work is top notch and will showcase your acting talent in a classy and technically brilliant way.  You get real directors and go through the real process of creating a professional scene.”

“Academy Reels is the”Ferrari” of reel makers.  I had the great good fortune of working with Academy Reels,both as an actor and an acting coach and found this company to be one of the best in business.I also had a ball. Jonathan Heap is an extraordinary Academy Award nominated director and his technical team is first rate.He is a gift to actors, and having been in the business over 40 years, with over 300 credits to my name, I should know. I can’t recommend Academy Reels highly enough.”

“The results are spectacular, the reels look like they’re pulled from a Hollywood film or TV series.  I send all my clients needing original reels to Academy reels.  In the business presently nothing is more important for an actor to have than a slick, well produced reel. Academy reels is the go to for this purpose.”

“If your looking for a demo reel/show reel, working with an experienced  and fun Hollywood director, then these are the guys”

“Working with Jonathan and Phil was in a word-great! Their long-term working relationship made their process seamless : they worked as a unit and most importantly had a personal touch that  made a huge difference in my reel. From setup to post they work WITH you and the results speak for themselves…! Highly recommended!!!

“Working with Jonathan and Phil was not only a pleasure but I have been getting compliments on the work we did together since the moment we wrapped. A complete pleasure.”

Some of the movies our team has written, directed or worked on…

We know what we look for when we cast!
Make the reel that Casting Directors, Agents and Directors want to see.